Alarc'h 7 months ago diaspora
What is remarkable is that Huxley and his ilk have been announcing the program for decades, without any risk since no one in their right mind could take such a mean and inhumane program seriously, and yet it is taking place before our very eyes....

Joseph Teller 7 months ago diaspora
1984 was written by Huxley as a literary argument with Orwell's Brave New World. It was not an 'announcement', and it was meant as a warning that Britain could as easily go the way Soviet Russia and the Iron Curtain countries were, that it could lose its Democratic Socialism to a more authoritarian Tory Regime if Churchill returned to power, in light of the actions that Churchill had had carried out some horrific actions near the end of the war on the populations of other countries (such as the mass killings in Greece etc by returning weapons and some political power to previous Nazis against socialists).

Britain had a short lived Socialist oriented government after the war, before Churchill and the Tories retook power (they set up the beginnings of the NHS and had a large public housing drive to help house the many people displaced by the war destruction in the country, as well as the refugees who did not want to go home to countries now under control of the USSR/Russia).

Understanding the literature in the context of the history of the time is important to understand its meaning. Huxley was not part of some grand scheme to help bring about a future totalitarian, he was warning what the future could become based on the now he lived in.

Alarc'h 7 months ago diaspora
Given his brother's opinions, we can assume that Huxley's book is between the warning and the announcement. At best he revealed to the general public what was being said in closed circles in the hope that the public would be able to read between the lines.

Theaitetos (テアイテトス) 7 months ago diaspora
@Joseph Teller is a textbook #authoritarian, who goes around defaming people and threatening others if they don't do as he says. Mixing up authors is the least of his mental problems. Please be careful around this guy: 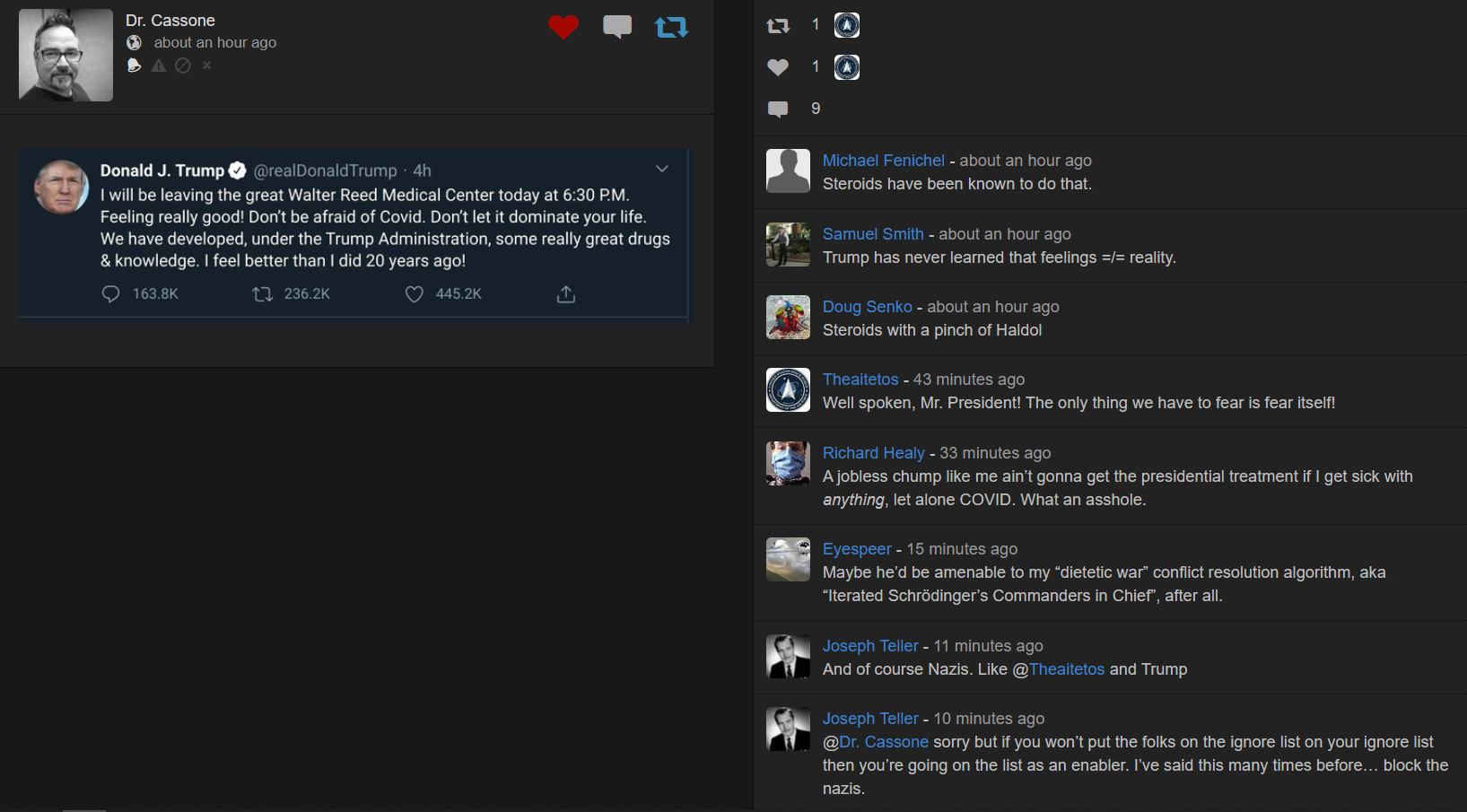 Joseph Teller 7 months ago diaspora
Oh Look, its Thealitetos, one of the most banned people on Diaspora and king of the sock puppet accounts.

Joseph Teller 7 months ago diaspora
Note, that Thealitetos is a Trumpie, a Nazi sympathizer and one of the extreme loonies on the net. He has been banned from NUMEROUS pods on the network over the past few years, although he changes his account name ever so often to try to slip thru the bans.

He denies science, and supports dictatorships and lies that come out of the Trump regime.

I need a favor from yours. Might you please call me once you finish throwing personal shit on the other, and decide to go back to the issue?

I am so weird that I am interested on interesting opinions. Insults I know them all, and do not pay attention of who says something but what he says.

Yes, indeed: I should be forced to live in a Bedlam for it. But I am still free and with access to the Internet.